BALTIMORE, Jan. 18, 2018 /PRNewswire-USNewswire/ — The 2018 Urology Residency Match results released today by the Society of Academic Urologists (SAU) and the American Urological Association (AUA) show 86 percent of U.S. medical school seniors participating in the Match – the highest rate in nearly a decade – have matched to urology residency positions. These individuals make up the 314 medical school seniors and other applicants who learned earlier today where they will spend the next five years completing their urology residency training. 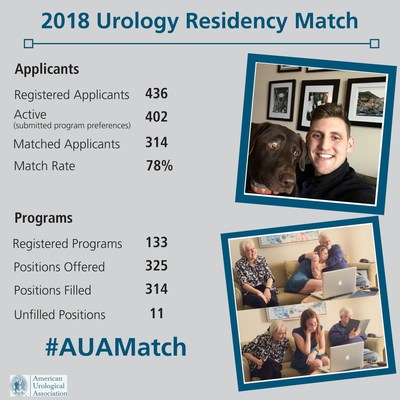 Nearly 440 applicants wishing to specialize in urology registered for this year’s Urology Residency Match. Of those who registered, 402 (92 percent) submitted preference lists, vying for a record 325 available positions across the country. When the matching algorithm was processed, 78 percent matched to a vacancy within 133 registered and accredited training programs in the United States, leaving just 11 vacancies unmatched.

«Urology Match Day is an annual rite of passage and one of the most important days in the lives of many U.S. medical students and applicants from around the world,» said SAU President, Byron D. Joyner, MD, MPA. «We are proud of the continued success of the Urology Residency Match and view the increased number of participating programs as a positive trend for the specialty, and a testament to the increased need and level of interest many have in urology.»

Medical students begin their residency application process at the start of their final year in medical school. After applying to various registered programs across the country, select candidates are invited by programs for interviews, which are held in the fall and early winter. Once the interview period is over, both registered parties submit their preference lists to the AUA who has performed the Match annually on behalf of the SAU for more than 30 years.

«We are honored to be a part of this life-changing event,» said AUA President, J. Brantley Thrasher, MD, FACS. «Each year we look forward to helping a growing number of medical students and applicants begin their journey to becoming urologists and are pleased to be a part of such a critical milestone for these talented young physicians.»

Results of the Urology Residency Match are closely watched because they can be predictors of future changes in physician workforce shortages and supply.

The AUA uses a computerized mathematical algorithm to match applicants with programs using the preferences expressed on their ranked lists.

Statistics on the 2018 Match and past Match results can be found by visiting: http://www.auanet.org/education/auauniversity/residents/residency/urology-and-specialty-matches

About the American Urological Association: Founded in 1902 and headquartered near Baltimore, Maryland, the American Urological Association (AUA) is a leading advocate for the specialty of urology, and has more than 21,000 members throughout the world. The AUA is a premier urologic association, providing invaluable support to the urologic community as it pursues its mission of fostering the highest standards of urologic care through education, research and the formulation of health policy.